The teachers in this show are both hilarious and frustratingly stupid. I think they were made this way to appeal to children who’re at that age where adults are just clueless, useless lumps that get in the way when you’re trying to escape an angry troll assasin.

Umm, I’m going to be completely honest here, I really don’t know what to say. This is probably one of if not, the most disturbing scene in the whole show. I get that it’s supposed to be funny, but as someone who’s been in a lot of trouble for hugging teachers, no part of me can believe that this is legal.

Yeah! You tell that zombie, Claire! Girl power! Despite being a Mary Sue, she has her awesomeness moments. I reckon Claire has the potential to be a really strong character, she just needs more flaws.

Oooooohhh!!! Good old rule number three. Best rule there is. Seriously, I’d forgotten all about this, and then boom, it happened. If only I’d been filming my reaction. It was a weird sort of gasping laugh, just in case you were wondering.

Wow, I wouldn’t have been expecting that if I hadn’t already seen this episode before. Of all the people that could’ve been in there, I wasn’t expecting her. After seeing this, I went back to previous episodes with the mole in them and sure enough, she sneakily appears after the mole leaves and nobody seems to notice. 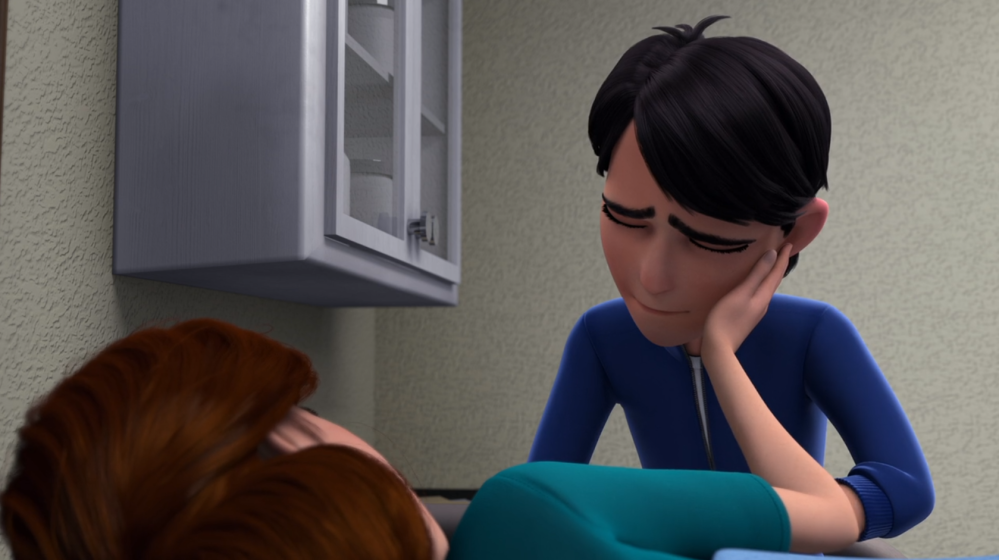 So, he decided not to tell her after all, interesting. I guess it kind of makes sense. After what happened to her the last time she found out, Jim doesn’t want it to happen again. Maybe all teenagers are secretly saving the world and their tiredness, secretiveness and general odour has nothing to do with hormones. Ha ha.

I’m pretty sure I was supposed to find this scene sweet or whatever, but in all honesty, it was the most uncomfortable scene to watch in the whole show. I’m saying this despite the previous CPR, because I didn’t actually watch that one. This however, reeks of teen awkwardness.

Uh oh! Angor Rot can get into troll market. That’s going to be bad. On the other hand, for a guy who’s supposed to be a pro at catching Trollhunters, I’m not very impressed that it’s taken him half the freaking first season to get this far. Things are definitely starting to happen now. I have to say, for a kid’s show, Trollhunters is getting pretty dark. Just warning you, if you only like happy stuff, there are PLENTY of sickeningly upbeat shows available on Netflix. Stay awesome and keep watching cartoons, Toonbiter out!