Yikes! We finally get to see what Gunmar looks like, which means it’s starting to make sense where Bular gets his looks and dramatic flair. Actually, I’ve changed my mind. The fact that Gunmar even has a son is a concept that I’m struggling with, can anyone actually imagine this guy dating?

I love how Toby’s suddenly obsessed with finding out the identity of this mole mascot. It’s actually a bit strange how he’s so certain that it’s a girl in there. I think it would be pretty ironic if it turned out to be a teacher, or another dude, or somebody’s parent. Well, actually I already know who it is, but I don’t want to spoil the story for anyone who hasn’t watched the show.

So, Gunmar does have a weakness, that seems promising. The fact the locations of the stones are extremely dangerous is slightly less promising, but when you’re the hero of a television show, you can’t expect anything to be easy.

Okay, we’re past this season’s halfway mark, and this is still bugging me. Why does nobody in the troll world wear pants? Everyone’s just got these caveman style pieces of fabric. I mean, sure it’s probably more comfortable, but what happens if it’s a really windy day? The answer to that is most likely that parents will quickly cover their children’s eyes and run in the opposite direction.

Aww, I love this scene, it’s so adorable. Notenrique may have started off being rude and obnoxious, but it turns out he’s actually really sensitive. If you haven’t seen it yet, basically Claire starts crying because she misses her baby brother, and his changeling replacement can’t stand to see her upset, so he spits on her mirror so she can see Enrique sleeping in the Darklands.

Umm, I wasn’t expecting that. Instead of freaking out about costumes (I think he should’ve just used his armour) he ends up fighting a massive mud monster on the school’s sports field, which is tiny by the way. Also, that golem came out of the ground, so why is it covered in grass? And why is the lawn in one piece, shouldn’t there be a huge hole in it? 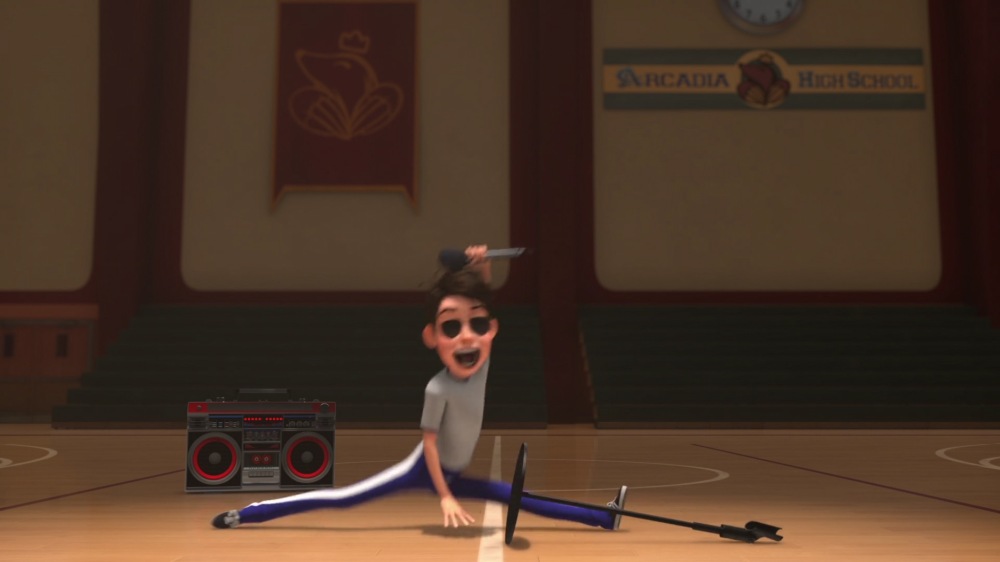 Oh my gosh! Generally, I avoid such language, but on this occasion I think that ‘cringe’ is the most appropriate word to describe this scene. Seriously, what is he doing? I get that his character is meant to be weird and nerdy, but I still think there should be boundaries.

Oh, great! The evil changeling who wants to kill Jim is now the school principal. I guess he’s lost that whole ‘you’re my favourite student, I just want to protect you’ attitude. And why are his eyes glowing red, aren’t they meant to be yellow? Ah, whatever.

This episode was interesting, because nothing really happened, but at the same time lots of stuff happened. Besides the golem, there weren’t really any big fights or anything, but with that ending, I’m pretty sure they’re working up to it. Stay awesome and keep watching cartoons, Toonbiter out!